“It’s a must to have some braveness”: In Winnipeg, getting assist for big public initiatives is a problem, say consultants

Amid the debate about reopening Portage and Main to pedestrians – and following a new poll suggesting two-thirds of Winnipeggers think it should stay closed – city experts, from planners to an ex-mayor, say that it goes without saying that large public projects generate a large public response.

“It’s only natural that transformative projects generate a lot of interest and emotion,” said Michal Kubasiewicz, president of the Manitoba Professional Planners Institute.

“It’s the community we all live in and it’s the environment we share.”

Public discussion about urban development is important and planners should prepare for it by offering information and places of expression, Kubasiewicz said.

Of course, the dialogue gets heated when it comes to public money, added Jino Distasio, director of the Department of Urban Studies at the University of Winnipeg.

On an average weekday, 81,000 vehicles pass Portage and Main, says the city of Winnipeg. Pedestrians have to go underground to cross. (Gary Solilak / CBC)

“But every city also needs to have a set of priorities and a set of projects, and we just need to figure out how to approach as many as possible in a fair way?”

Winnipeg voters will decide on October 24th whether reopening Portage and Main Junction to pedestrians is a priority.

Proponents expressed concerns about wheelchair accessibility, the need to make the city center accessible to both pedestrians and cars, and concerns about the safety of the underground hall and stairwells.

Opponents, meanwhile, cite traffic disruptions, the cost of the project and the possibility of collisions between cars and pedestrians as problems of the proposal.

A Probe Research poll of 600 Winnipeggers last week of August found that 67 percent of Winnipeggers disapprove of the idea of ​​reopening the city’s most famous intersection, compared with 33 percent who support the idea. This survey has an error rate of four percent. 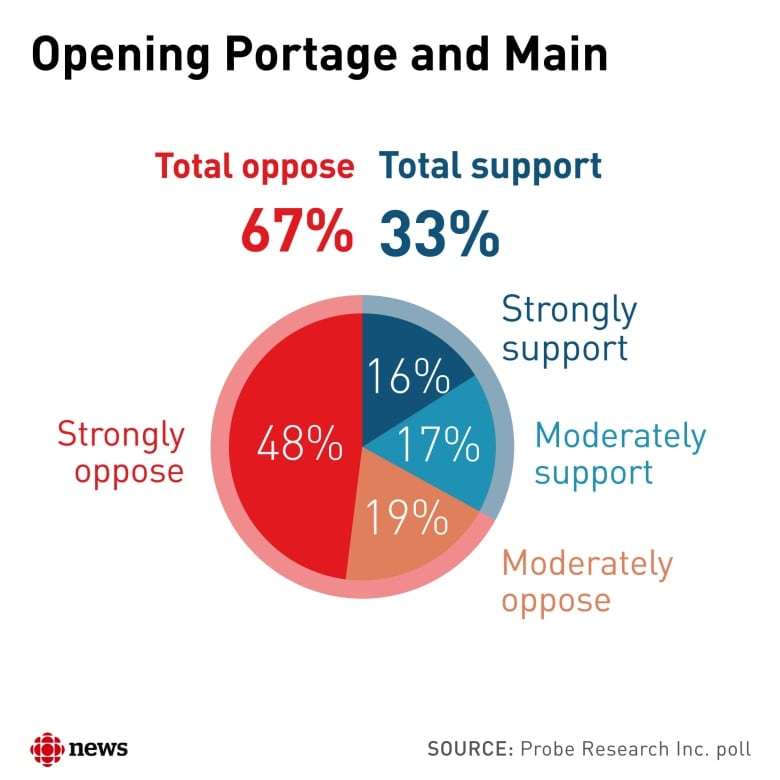 A survey by Probe Research suggests that a majority of Winnipeggers do not want to reopen Portage and Main. (CBC message graphic)

Some city planners have said that there is no strong vision of what a reopened Portage and Main would look like.

Milgrom, director of urban planning at the University of Manitoba, said it was harder to sell an idea to the public without having a strong vision for the project and where it stands within the plan for the city as a whole – and that is not only applies to Winnipeg.

“Change is very difficult everywhere. Change is inevitable in cities, but change is also … difficult for people to imagine. “ 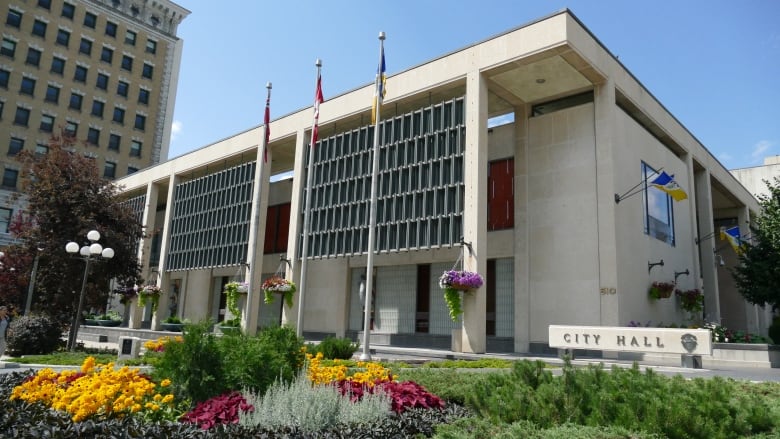 The Civic Center project, which also included a new town hall, was the subject of a referendum in 1957. The result was a 62 percent vote in favor of moving the City Hall on Broadway near the Manitoba Legislature, but it came before the province offered to fund the complex in its current location. (Jaison Empson / CBC)

It is normal to see debates about projects like cultural institutions that are outside the basics of what a city is, Milgrom said.

Winnipeg doesn’t have the same level of development as much larger cities, added Milgrom, which could mean that new projects are getting more attraction and public attention.

“We know a lot more about what’s going on around the corner than people in bigger cities,” said Milgrom.

“We probably generally have better access to political actors than people in other cities. So when we make a lot of noise, our politicians tend to hear us. I think we are quite unique in that regard.”

Looking back on the city’s history, Distasio told the U of W that a period of slow suburban growth and downtown decline in the 1950s put development in the area in the hands of the government, with additional scrutiny.

Projects that followed at the time include the provincial and community-funded Civic Center complex – which included the City Hall and the soon-to-be-demolished public safety building and officially opened in 1964 – as well as projects like the Centennial Concert Hall (opened in 1968). ), the Manitoba Museum (1970), and the Royal Manitoba Theater Center (1970).

The Civic Center project was the subject of a 1957 referendum, although the result – according to the Winnipeg Architecture Foundation website – came in a 62 percent vote to move City Hall on Broadway near the Manitoba Legislature before the province offered to finance the complex the current page. 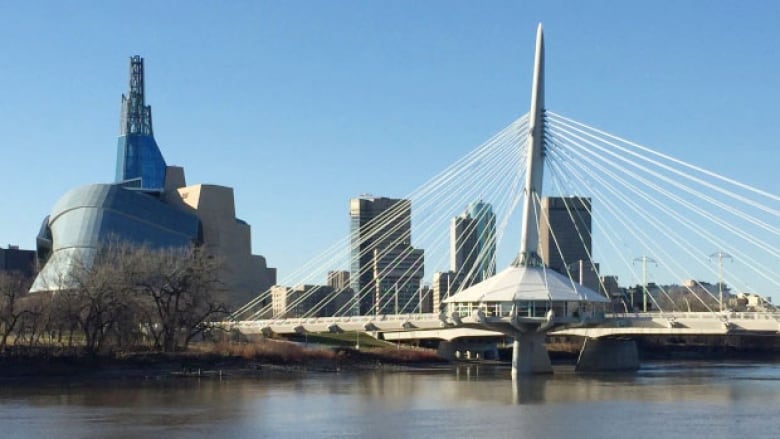 Esplanade Riel, seen here in a 2016 file photo, is one of the projects Winnipeg should be very proud of, says former Mayor Glen Murray. (Travis Golby / CBC)

Another significant government partnership, the tripartite Core Area Initiative, created The Forks and Portage Place – and created their own fair share of controversy.

“Unlike any other North American city, I think Winnipeg needed more attention from the three levels of government to urban intervention projects simply because of our period of slow to stagnant growth that has really gripped the city, until maybe the last 10 or 15 years “said Distasio.

“You have to have courage”

“I think we’ve done more exciting things. I don’t think you could ever build [the Canadian Museum for Human Rights] in Toronto.

“When we were debating the construction of the Riel Esplanade, there was a mayoral election in Toronto that discussed no bridge from the Riel [Billy Bishop] Island airport to the city center, “said Murray.

“I think we should be very proud of that.” 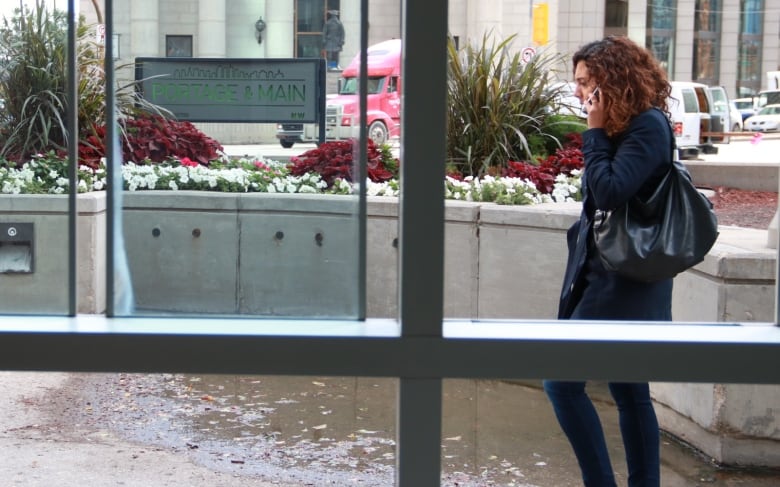 Winnipeggers will vote on October 24th whether the Portage and Main intersection should be reopened to pedestrians. (Ian Froese / CBC)

In addition to the museum and Esplanade Riel – which he said were so controversial that they were never officially inaugurated – Murray also oversaw the construction of the MTS Center (now Bell MTS Place) during his tenure.

The inner city arena also sparked discussions, as critics described it as too small and poorly located and protested against the destruction of the old Eaton building on the site.

Harry Finnigan, who served as Winnipeg’s planning, land and development director during Murray’s mayor, said he remembered having mixed feelings about the project at the time – he appreciated the importance of the Eaton building and feared the site would too small for an arena.

The idea that Winnipeggers are not used to development or are less comfortable with change does not hold water in my opinion.– Former Head of Planning Harry Finnigan

But he said he had met with proponents of the project and everyone agreed to do the best they can for the project. Today he calls it a success.

“I think it works really well,” he said. “It’s one of the most popular arenas in North America.”

Winnipeg’s size provides an advantage for building a general consensus on projects as people are used to talking to each other, he added.

“The idea that the Winnipeggers are not used to development or are less comfortable with change does not hold water in my opinion.”

The key to making projects like this a reality, Murray said, is leadership and vision, as well as thorough research to ensure the projects actually work.

“You just have to be clear,” he said. “You have to have some courage.”

With files by Ian Froese and Bartley Kives